In investigating the lives of our ancestors much can be inferred from the tax assessment rolls.  In researching the Flemings of Derby Township we can see  acquisition of acreage, clearance of forests for pasture and crops, and the growing value in real property. Five of Alexander’s sons (James, John, Alexander II, Donald, and Charles), and his son-in-law (James Agnew)  became established as farmers. William, the sixth son, left his farm and moved to Owen Sound in the early 1880s.

Assessment rolls were completed annually by the township in order to determine taxes payable by its residents.

Assessment rolls are used to record information about a resident’s property in order to determine the amount of taxes payable on real property.  The following information is recorded: land and building value; status as residence or business, religion (for school taxation purposes), age, and occupation of head of household and number of people living on the property.  Other information is collected from time to time reflecting local or provincial requirements. [Source: Finding Municipal Record, Research Guide 209, Archives of Ontario]

They have been called a “census substitute” since the data gathered included number of people in the household, occupations, age distribution of children, and religion. Perhaps most valuably, the assessment rolls were similar to the agricultural census in collecting information on location, value of real estate, acres cultivated, orchards, wheat, and types of livestock. The rolls provide a detailed account of changes in residents and land value during the ten years between each Canada Census. Further they fill in the picture 1881 to 1911 for which the agricultural schedules of the Canada Census have not survived.

They contain some curiosities as well. For many years (1855 – 1925), the assessors enumerated the number of dogs and bitches. Statute labour figures were also gathered – the number of males at home aged 21 to 60 eligible to work on the roads, the total number of days required, and the road division.

In researching the Fleming families in Derby Township, Grey County we are fortunate to have access through the Archives of Ontario to the Derby Township assessment rolls for 1878-79, 1885, and 1890-1898

Below is an image of the 1878 assessment roll of properties mainly in Concession 6  showing acreage, value of real property, religion and livestock.  Of note is Donald with 100 acres in Concession 6, South ½ of Lot 9, and James immediately to the north with   100 acres, plus two other properties being worked by his son A.R. Fleming. 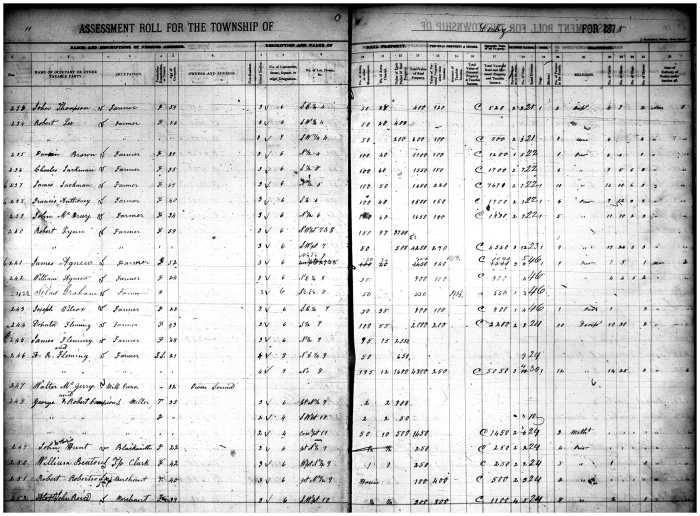 These rolls have provided time lines on holdings by family members over twenty years from 1878 to 1898 to extend what we can extract from the agricultural census for 1861 and 1871. From these, as an example, we see that James Fleming became a substantial land owner increasing the value of his holdings from $2,500 in 1861 to $7,500 in 1898. In addition to his main farm of Forest Lawn (Concession 6 North ½ Lot 9) he had 250 acres (Concession 9 North Lot 8 and Concession 8 North-East ¼ Lot 9), largely wooded. He took particular pride in his orchards, sheep and horses, interests he had in common with his brothers John and Donald.

Other items of interest obtained from the rolls:

With more analysis and comparisons much else might be mined from the rolls about the residents and value of the farm land.