What if we could tell a family story through a mix of media, constructing a narrative arc with text, pictures, voice, video, and suspense; as well as one that involves family members? This is what has been accomplished in “Daddy, what did you do in the war?” A Soldier’s Story of WWI – a film (at YouTube) written and produced by Martha Rowlett about her father, a farm boy in Virginia who was drafted into the USA army during World War One. 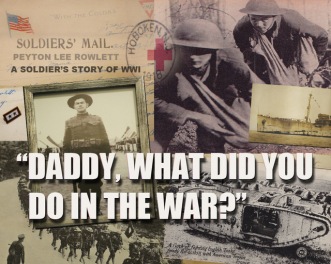 The author crafted the script from letters Peyton Lee Rowlett wrote to his family, employed official war records, and blended in background information about the United States and its war effort in the years 1917-1918. Two young people from the current generation are the voices for the earlier generations.

This is an educational piece, created to recognise the centenary of the Armistice of November 1918, and to stimulate an interest in family history among youth. Credits at the end reference materials from the Library of Congress (loc.gov) and list other sources for viewers interested in the war and audio resources available online.

The film was made by Patricia Bradley, of One Life, One Legacy™Films . It’s an absorbing account that conveys through sound, video effects, and archival materials a feeling for the time period and war conditions.

Typically family histories are created with text and images and are based on family papers and genealogical research. In fact, we are in the process of creating exactly that about the Fleming family of Derby Township, Grey County. But this film shows that there are other approaches and techniques.