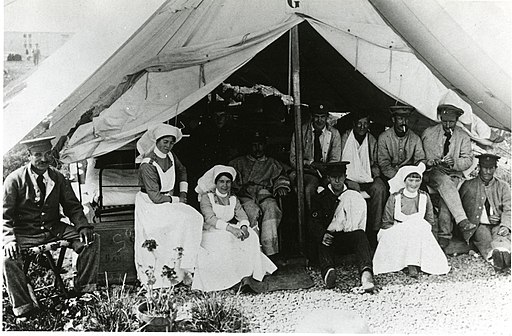 Myrtle Melissa Brown, a graduate nurse, enlisted with Canadian Army Medical Care (CAMC) on 24 March 1917 as a Nursing Sister. She was one of thirty-one nursing sisters from Grey County (1), and among the eighteen who had graduated from the Owen Sound Collegiate Institute. (2)

Myrtle was from a farming family in Derby Township near Owen Sound, the eldest daughter of Melissa Brown and Samuel Horton Brown. Her grandparents were John Fleming and Margaret Robertson of Kilsyth and her great grandparents Alexander Fleming and Jean (Stewart).

Born 22 Jul 1889, Myrtle was described in the Attestation Paper as twenty-eight years old, 5’ 3” in height, 116 pounds in weight, and with grey eyes. She was a Disciple (Church of Christ) by faith.(3)

In total, 3,141 nurses served from 1914 into the early 1920s, with more than 2,500 seeing duty overseas. Trained nurses before the war, almost all of them came from hospitals, universities and medical professions from across Canada and the United States. All were women. Most were single and between the ages of 21 and 38; the average age was 24. They were all were volunteers, and there was never a shortage. For example, when a call was made in January 1915 to fill 75 positions, 2,000 nurses applied.